I haven’t shared a lot lately about my WIP so I thought I’d spend today giving an update.

First, I finished my first draft in the middle of December! 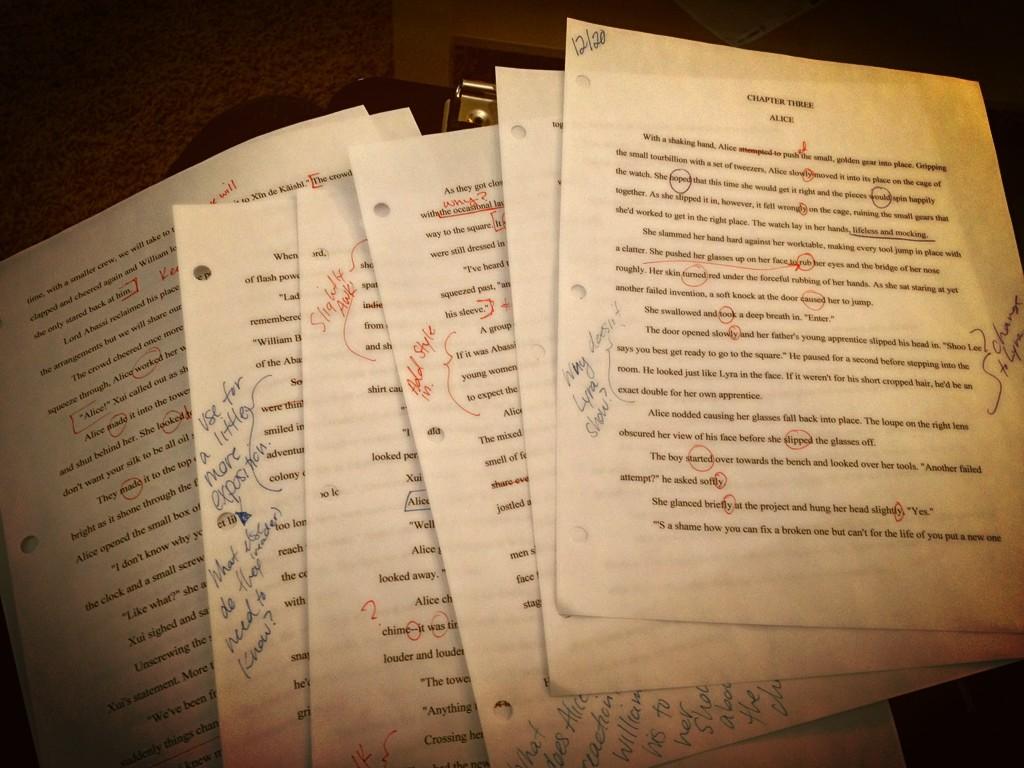 My first big change came in the form of developing two satellite characters (the parents of MC Alice Hadley). I read through the prologue searching out passive verbs (ick!) and -ly words (boo!). Afterwards, I thought, “These two characters who are are essential to the plot really need to be fattened up!” So I developed their physical image, their motivation in the prologue, their mannerisms. Then I got to work. I re-wrote the prologue which can found on my WIP Page. I’m very pleased with the change.

With chapter one, it’s really the first introduction to New London so I wanted to do something really important with it. I took some inspiration from Harper Lee’s “To Kill a Mockingbird” and used the social structure of New London to tell its story… I’m also very pleased with it:

The buildings of the colony drew a jagged line across the sky as wide swaths of sunlight illuminated the fresh paint, perfectly lain bricks, and smooth trim. Parliament lay in the center of the colony with its clock tower rising high into the sky, a beacon of order and direction visible from everywhere in the colony. The ministers, lords, and ladies all woke to their staff ushering them to new committees and meetings while workers diffused through the city collecting garbage, fixing cobbles, repairing buildings. Down the streets, apprentices lumbered into the light while their master’s still slept. The farmers were already on their way towards the fields that blew and shifted in the wind, ready to welcome the warm sunlight. The slums, hidden by the rest of the city, slept into the day.

To create that, though, I had to figure out the social structure and the layout of the city. This is the best I’ve got because designing cities is nigh impossible: 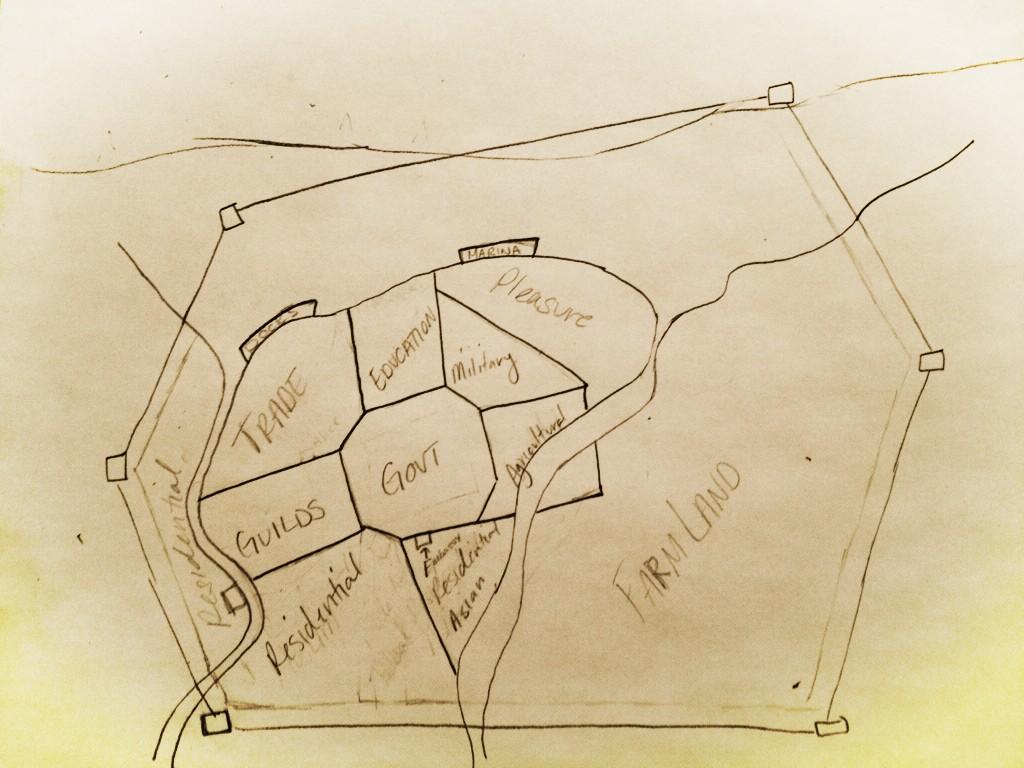 I do not have any colored pencils so it’s not colored but basically the top part is a lake with two rivers that descend through the colony. The hexagon shape is the barrier that keeps the colony safe from the wildlife of Kepler and filters the air so that the humans can survive on this alien planet.

My biggest goals with this revision are: eliminating passive verbs, catching POV violations, trying to get everything into place. I’m trying to rush (I’m not doing a good job of it though) so I can finish with a second draft by January. The big thing is to get it readable for beta-readers because the writing process means that some things that you wrote in the beginning don’t match up with what developed towards the end. Writing in itself is discovery so the whole thing needs to be molded for the best story. So far, I’m doing really well and happy with my updates.

Today, I wanted to work on chapter six but got derailed trying to figure out the military that two MCs and one satellite character is in. William is a captain, his father is the Lord General, and Morris is a Lieutenant. I wanted to know how big their army should be for the 400k population of New London (I put it at 20k) and what that meant for the structure. I also developed the enlisted and officer structure. The most fun part, however are the drawings I made for their uniforms and rank insignia: 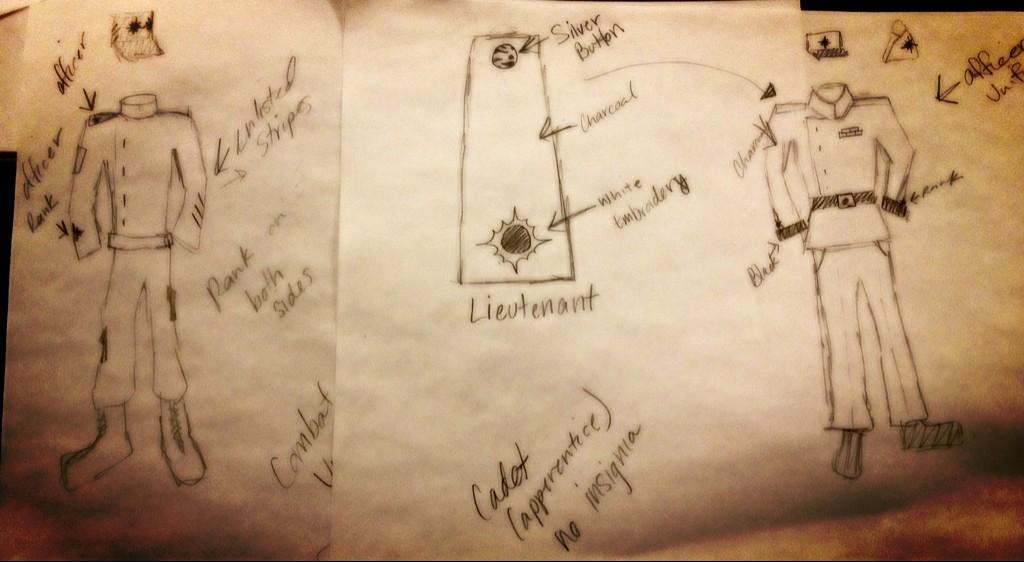 On the far left is the universal combat uniform. You can see I have a little triangle on the left sleeve, that’s a lazy person’s drawing of the star in the center of the shoulder strap in the center. The right sleeve has the slashes for ranking. The officer’s uniforms have shoulder straps with insignia, while the enlisted uniforms do not.

On the right is the dress uniform which is the one that William most prefers (while Morris prefers the left uniform). I’m not done with it. I think the shoes should be shinier, have spats, etc. But for the most part it has the same shoulder strap in the center, is worn maybe with the flight cap on the right (the triangle one). Anytime you see a weird squiggly half-star, that’s my way of saying “some sort of insignia should be here.” But on the hats, I’m worried it might not work.

The center image is the shoulder strap. The circle at the top is meant to be a silver button that is a relief of the planet of Kepler (known to us real life people as Kepler 22b). The insignia of the sun is meant to be a star. I wanted the choices of insignia to reflect the new planet, not the old. This is really one of the first places that I’ve gone with the sci-fi thing which feels great! Because The Abassi Expedition is steampunk, I’ve tried to stick with mostly Victorian style, so I played with the insignia a lot. The other two symbols I used are a symbol of the parthenon for the governent and a scythe over a rapier.

Okay, that’s the last of my crappy drawings I’m going to submit you too. I hope that your eyes aren’t bleeding!

If you have any suggestions for city-planning, revision, uniform design, etc. Please let me know!